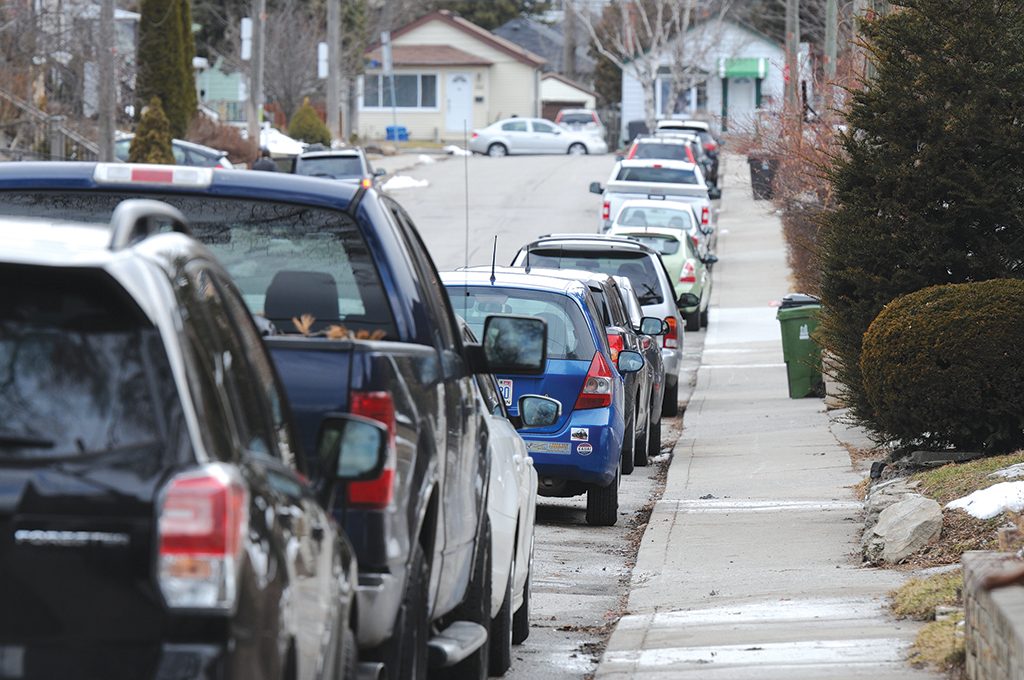 Permit parking may be coming to a residential street near you.

Residents of Birch Cliff and the rest of Ward 20 have the option of applying to have permit parking implemented on their own streets under a bylaw amendment that was passed by Toronto city council on Feb. 26.

This doesn’t mean that permit parking is a done deal on residential roads, but rather a choice for citizens who live on streets where parking is a problem.
“There have been challenges with parking in the ward, especially since last summer. We’ve had an increase in phone calls and emails from people getting ticketed on streets and about the challenges of parking in general,” explained Ward 20 Councillor Gary Crawford, who moved the amendment.

Until last summer, enforcement of the three-hour parking rule on residential roads was based on complaints from individual homeowners who had to call the city and ask for cars to be chalked and tagged.

The trickle of tickets became a flood last summer when parking enforcement, which is controlled by Toronto Police, abandoned the complaint-based system and launched a blitz in Scarborough targeting residential streets.
Crawford said he felt compelled to act out of a sense of fairness.

“We were getting an inordinate amount of complaints. Some people were getting two tickets a night. Six or seven tickets a week,” Crawford told Birch Cliff news in an interview.

One of the people who’s been strongly advocating for permit parking is Birch Cliff resident Tanya Haze, who lives in an older house with a shared laneway for two houses and space at the back of the property for only one small car.
Haze and her husband require two cars because they both work full-time and have three children who need to be driven to many activities. One of their vehicles doesn’t fit at the back of the property and sometimes they need to park a corporate vehicle at their house.

“Tickets have increased now to $30. It (ticketing) doesn’t happen every day, but there have been times where it’s happened for several days in a row. And then it’s through the roof. We can’t afford to pay that many tickets and we have no other option,” Haze said.

Robin Seigerman does have adequate parking at her own home but said she finds it absurd that people can’t park in front of their own homes, especially since many Birch Cliff roads are not “through streets”, not congested and don’t have schools on them.

Not only is Seigerman in favour of permit parking, but she thinks the three-hour rule should be lifted entirely.

“People are having trouble paying their mortgages. They take in tenants. They take in family who pay rent and people have got cars. The city has to adjust to a changing world. You can’t have things the way they were in the 1920s and 30s. It’s just not realistic,” Seigerman said.

The parking issue has generated a great deal of discussion on social media pages, some of it acrimonious.

Residents opposed to permit parking often cite problems with snow removal and garbage pick-up. Having a lot of cars on the street also makes it more difficult to get out of driveways.

Some people think permit parking is a hidden tax or cash grab by the city but Councillor Crawford said that is absolutely not the case.

“This has nothing to do with a cash grab from my perspective. I’m the Budget Chief of the City of Toronto. If we’re looking at revenue tools there are other more effective ways to bring in substantial amounts of money for the city,” Crawford said

Some Ward 20 residents who’ve lived in other neighbourhoods with permit parking have concerns based on their personal experience.
“It’s not going to be this utopia with ample parking like people think. They’re going to be angry that they pay now for a permit and they can’t park anywhere close to their house,” said Ken Jones, who said he has seen permit parking be abused in other parts of the city.

He cites a home-based business in the Beach that bought permits for multiple trucks and parked them all on the street. Not only did it take away parking from individuals, but the business owner would strategically park one truck across two spots during the day so he could squeeze in a second truck late at night.

“Neighbours would hate it. I’ve seen time and time again neighbours come out and yell at him. It caused a rift between so many neighbours, people had to park up the street all the way far, far away from their house because this guy did that.”

There are many misconceptions about how permit parking will work in Ward 20 and in order to clear some of them up, Birch Cliff News spoke to the City of Toronto’s Vince Loffredi, Manager of Community Council and Issues Management, Toronto and East York and received emailed answers from Eric Holmes of Strategic Communications.

Permit parking will not be implemented across the board but rather on individual streets or blocks where a majority of residents agree to the new system.

People who want permit parking will need to submit a petition to the city signed by more than 25% of the residents of their particular street or block.
Once the petition has been received, the city will then conduct an official poll. In order for it to be successful, at least 25% of the residents of the street or block need to vote and a clear majority of more than 50% need to be in favour of implementation. For the record, Loffredi said 98% of the streets in the Beach went through this same process.

If the program is implemented, the only people eligible for a parking permit are the people who live on that street or block.
People who apply for a permit must present their driver’s license or vehicle registration linking them to the property where they live. The city then consults the inventory of parking spaces on the street and on people’s properties. The number of driveway parking spots is verified as well as things such as garages being used for storage instead of parking.

For example, a young adult who has returned to their parent’s home because they can’t afford Toronto’s sky-high rents needs to provide license plate numbers of their parents to verify that they can’t park in the driveway. That young person would be provided with a Priority 1 fee of $16.31 a month plus HST, which is the lowest fee.

And then there’s the Priority 3 fee of $57.20 a month plus HST. Loffredi said it’s for people who are parking out of convenience and not necessity.
“Priority 3 is people that have parking,” Loffredi said. “I have one car. I have one garage. But I don’t want to park in my garage. I want to use it as a workshop. The city will allow you to get a parking permit, but it’s considered a permit of convenience. You would pay more for that as an incentive to clean out your garage and park on your own property.”

Temporary parking permits for visitors are available from the city for 24-hour, 48-hour and weekly on-street parking provided space is available.
Residents interested in establishing permit parking on their street are can email Councillor Gary Crawford at councillor_crawford@toronto.ca or call 416-392-4052 to begin the petition process.

~ Hedy Korbee is a journalist who lives in Birch Cliff. Disclosure: Hedy lives in a home with more cars than parking spaces.