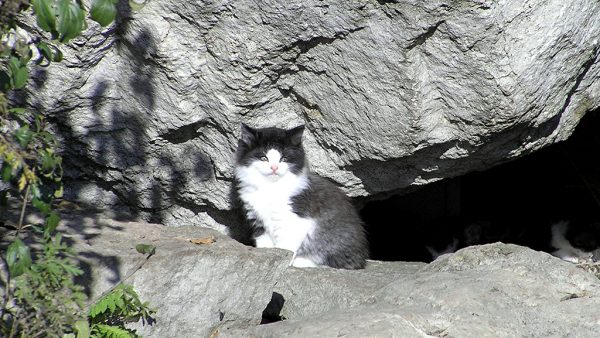 The Last of Bluffers Parks’ Feral Cats has Passed

By Lee Ellis
Half Mask lived her life exactly as she chose. Many people know of her and the other feral cats in the colony at Bluffers Park for the past two or three decades. On Sunday, August 2nd, this beautiful longhaired tuxedo kitty passed away at 15 years of age, the last remaining feral cat in the park.

As much as she didn’t let humans get too close to her, she liked other cats, especially a handsome, long haired black cat named Tommy. The two of them cuddled up together in one shelter in winter, went on adventures together and generally ate and played together. Unlike Half Mask, Tommy is tame and very outgoing. Judy, the main caretaker for the past 10 to 15 years recalls a time a few years ago when Tommy’s family moved away and he escaped. Several weeks later he was found and the decision was made to take him back to Bluffers Park, his home, where he’d have several caregivers. Half Mask’s reaction was so sweet when she saw him. She meowed so much and wouldn’t let him out of her sight!

The cats had many caretakers. At times in winter, Brimley Road was so treacherous that Lynn and John Paul felt driving would be unsafe and would walk down, put out food and warm water and walk back up because they didn’t want the cats to miss a meal. John Paul also made Half Mask and Tommy’s shelters in winter, insulating them with straw for warmth. They would feed the cats at night and would then go for a walk, and many times Tommy and Half Mask would join them. On one walk a fox decided to follow them so Tommy put himself between the fox and the petite Half Mask. The fox left.

Eventually the kitties decided to take up a new residence by the floating homes where they were favourites among many of the residents. Nancy, the owner of one home, started feeding the cats and also had a shelter for them. She would frequently see two faces looking inside in the early hours of the morning. Having Nancy feed them took some of the pressure off Judy, Lynn and John Paul and a few others who went to the park twice a day to feed the cats. It also allowed the fans on Facebook to breathe a sigh of relief. The more people looking after the cats, the better.

With the Facebook page came international fans. Lisa worked in Toronto for several months in 1993 and kept up with local news. She found the Facebook page and was intrigued by them and befriended a couple of the page members. She regularly visits the cats when she is in town.

Kelly, who lives in the UK, took care of a feral colony herself and found the Facebook page. On a trip to Canada she made sure to go to the park and was able to see and photograph the feline celebrities.

Judy maintains the Facebook page (https://www.facebook.com/Scarborough-Bluffs-Feral-Cats-160977317274323/)
which has over 2,000 followers, and has been the main contact between the cats and their fans. We are kept up to date with photos and stories of the cats.

As her primary caregiver, Judy has so many memories of Half Mask. There were times where Judy would call her repeatedly and Half Mask wouldn’t come out, she’d just watch her until Judy noticed a flash of bright white fur or feel a pair of eyes looking at her.

As for Half Mask’s final days, she hadn’t been seen by anyone from July 28th till August 1st. On August 2nd, Judy found her in a bad physical state but true to her feral ways it took Judy and two others to get her in the carrier to the vet. Half Mask passed away later that day as it was discovered she had a heart condition. The problem with a cat that is so feral is medicating them would be impossible. Judy said it was a gift to her and the page followers that Half Mask was found so that there is closure. It would have been awful to have had her disappear without a trace.

RIP, Halfie, our beautiful black and white princess. We all miss you. A kitty that wouldn’t be touched, touched so many.