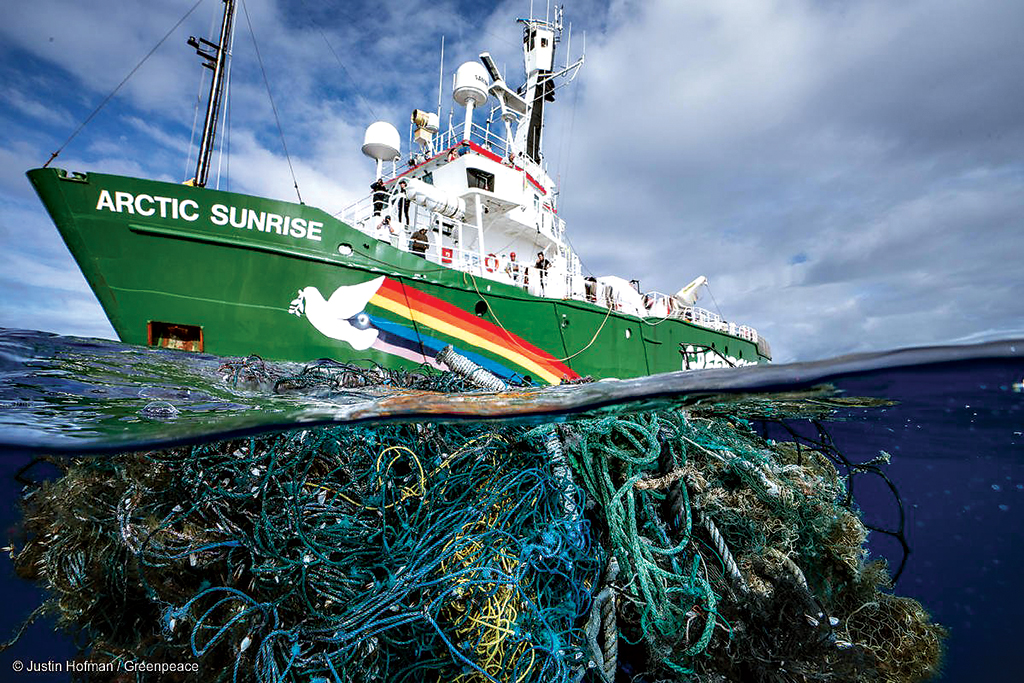 Debris from a fishing net seen underwater with MY Arctic Sunrise ship.

After contributing the recent article about ‘Love Your Lake’, it prompted me to promote good health for our oceans which also endure a negative impact from plastic pollution. To describe the broader issue of overfishing, Ali Tabriz documented the 2021 film “Seaspiracy”. He wanted to see pressure on world leaders to make 30% of our oceans “no-take zones” by 2030. Tabriz reports that discarded plastic fishing nets account for 46% of the Great Pacific Garbage Patch, which indicates that overfishing is an enormous problem.

The International Fund for Animal Welfare (IFAW) website states, “Oceans are one of the greatest sources of life on Earth. They cover 70% of the globe’s surface, provide us with more than half of the world’s oxygen and are home to millions of species that play critical roles in marine ecosystems. Healthy oceans mean a healthy planet. The ocean’s fate depends on the actions we take today.”

The Internet notes the following facts regarding the world’s largest fish:

Whales are some of the ocean’s most fruitful gardeners. Their poop fertilizes the surface of the ocean with nutrients that are fundamental to the health of ocean ecosystems, the global nutrient cycle as well as the carbon cycle. In addition, whales bring nutrients up from the bottom of the ocean to its surface, where they help phytoplankton to grow.

The Atlantic bluefin tuna is a highly sought after delicacy for sushi and sashimi in Asia – a single fish has sold for over $1.75 million! Driven by such high prices, fishermen use even more refined techniques to catch these fish. Tuna are a top predator in the marine food chain, maintaining a balance in the ocean environment.

To ensure that fishing survives for the many communities that depend on it for their livelihood, Tabriz criticizes current fishing subsidies and the weak enforcement laws for sustainable fishing methods. Despite the waves that the documentary made, there is a consensus among all climate scientists and marine biologists that our oceans are in decline and we must reduce our consumption of seafood before it is too late. Restaurants, hospitals and retirement centres, for example, have a great opportunity to be leaders by offering fewer fish selections. Fish & Chips establishments need only to follow the example of Long John Silver, America’s largest seafood chain, by testing plant-based sea-inspired options of crab cakes and fish fillets.

Sir David Attenborough, world renowned environmental filmmaker, stated on 60 Minutes, “Repopulations of the oceans can happen within a decade if we have the will to do it – but we require everyone to agree on it.” As Attenborough realizes that his generation has failed, he now spends more time focusing on educating the youth.

~ Larraine writes children’s books that highlight the joy of composting and pollinating with the adventures of Pee Wee at Castle Compost. With illustrations, songs, and poems, the stories unearth the miracles of nature’s cycle of life. Fun and factual for all ages. To order, postage free visit: www.castlecompost.com