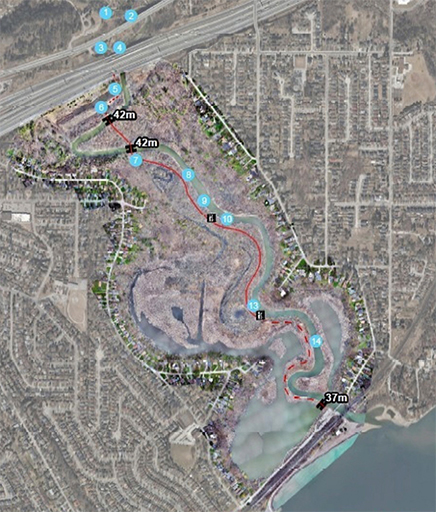 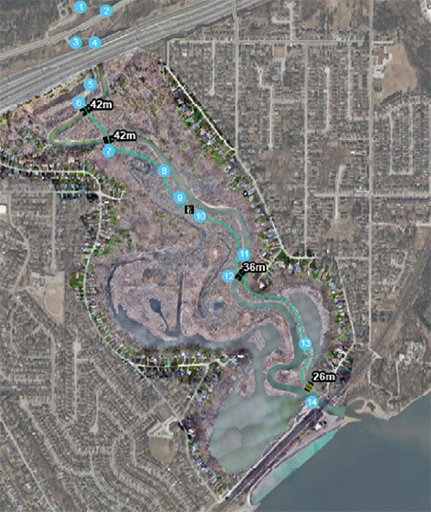 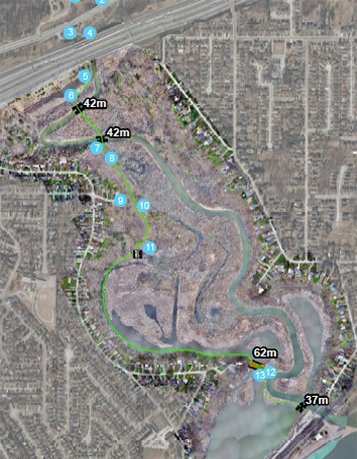 The images above show the 3 proposed routes for the raised boardwalk linking Rouge Beach with Mast Trail.

(L) Route 1: West Bank The Route 1 trail option runs south from the Highway 401 underpass and transitions into a raised boardwalk that crosses the Rouge River twice, then continues along the river’s west bank. The boardwalk trail follows the pattern of the river and features two lookouts. Route 1 ends with a bridge connection from the west bank to the proposed pedestrian plaza at Rouge Beach.

(Middle) Route 2: West Bank Crossing East Bank The Route 2 trail option begins by following the same path as Route 1, running south from the Highway 401 underpass, transitioning into a raised boardwalk trail that crosses the Rouge River twice and follows the river’s west bank. The boardwalk follows the pattern of the river, features a lookout, then crosses a bridge to the east bank. From there, the boardwalk trail runs south along the narrow spit of the Rouge River channel. At the end of the spit, a floating boardwalk crossing and staircase connect the boardwalk trail with the east end of the existing pedestrian bridge.

(R)Route 3: West Boundary The Route 3 trail option begins by following the same path as Route 1, running south from the Highway 401 underpass and transitioning into a raised boardwalk that crosses the Rouge River twice. After the second river crossing, the boardwalk trail heads south, climbs a gentle slope and veers westward to a proposed lookout. From the lookout, the boardwalk trail descends a steep slope and follows the bluffs that border the western boundary. A floating boardwalk then crosses to the narrow spit along the west bank of the Rouge River. From there, the raised boardwalk follows the same path as Route 1, crossing a bridge to connect with the proposed pedestrian plaza at Rouge Beach.

Residents of the West Rouge neighbourhood are about to discover what residents of Brimley and Kingston Road area have know for a long time…
If you build it they will come!

However, Rouge Hills Drive and Lawrence is no Kingston Rd. and Brimley. Both are single lane roads in each direction nestled in the quiet West Rouge neighbourhood.

And that’s what’s causing the most concern for area residents.

Proposed improvements to the day use area include a redesign and reformat of the upper and lower parking lots, a renovation of the beach washroom facility, and the addition of a pedestrian plaza and boardwalk pier, according to the Rouge Urban National Park (RUNP) web site.

Plans are in place, however, to expand the upper parking area. Parks Canada is also working with the City of Toronto to provide parking further west on Lawrence Ave. E. although no exact number of spots was provided.

“We would like to see a net increase (in available parking) in the Starspray Ave. location, that way it’s addressing the problem somewhat, but obviously losing any parking spot is… going to have effects.” says Reza Khoshdel the West Rouge Community Association (WRCA) Director of Environment and Conservation. He goes on to say “They’re (Parks Canada) going to push people to take public transit or bicycles or whatever. But the problem is that, that part of Toronto, East Scarborough, has been underdeveloped, underserved with respect to transit for years
The truth of the matter is, is that a lot of people just drive there, they just have to because it’s so far off at the East end of the city. We’re literally on the Scarborough Pickering border.”
“People have to drive there to get there.”

Parks Canada superintendent Omar McDadi says, “We’re moving ahead with a shared solution… working with the city of Toronto to alleviate congestion. As well as the parking concern… and the corresponding safety because people park illegally on the street. We’re really looking to solve that problem”.
The lower parking lot was also unavailable to RUNP visitors for weeks, sometimes months, as recently as 2017 and 2019 due to severe flooding. The flooding also creates an environmental impact when oil, salt, dirt and debris flow into the marsh area adjacent to the lower lot.
The keystone of park improvements is to be a 2.5 km elevated boardwalk linking the beach on Lake Ontario to the Mast Trail, North of the 401.
The boardwalk part of the project is to help improve visitor safety and accessibility. Park staff are looking to prevent the trampling of sensitive vegetation that plague the park; the result of 13.5 kilometers of improvised/ informal trails currently being used by visitors. Staff are also looking at reversing the present situation where pedestrians currently wishing to connect from the beach to the Mast Trail must leave the park and negotiate crossing two dangerous Highway 401 on-ramps without the aid of a sidewalk or signalized crossing.

Addressing the neighbourhood concerns of increased visitors to RUNP, Mcdadi says “One of the goals of the project is to ensure we are responsibly managing the number (visitors) that are there and making sure we design things the right way from an environmental perspective and we fix things that need to be fixed”.

“We now have the most wardens in the country other than Banff and Jasper National Parks. Our number one operational priority in 2021 is the beach area in terms of increasing cleaning…We’ll have a team of compliance officers that will be working in the area to try to curtail the significant issues in the area like dumping, partying”.

Just as improvements, such as bus service, to Bluffers Park brought a substantial increase in visitors; (Covid-19 notwithstanding) those living closest to the park bore the brunt of the problems. Illegally parked cars choking residential streets, garbage, noise and increased “night life” ie. bon fires and parties on the beach.

Also if you’re not in the Bluffers Park by 10am on a sunny summer
weekend you can forget about getting in unless you’re stout enough to brave the steep walk down Brimley not to mention the walk back up.

The lack of a police presence in the Bluffers park also contributes to the problems. The situation is so bad the city is considering ways to restrict access to the park.

In a letter to Parks Canada the West Rouge Community Association has 5 “asks.”
• Find some additional parking to alleviate neighbourhood congestion.
• Find Accessible parking for those with mobility issues.
•The proposed 2.5 km elevated boardwalk be designated pedestrian only. No Bikes.
• Provide bicycle parking and storage.
• A garbage and debris plan that will keep the park and neighbourhood clean addressing increased park use.
Public feedback has been extended to May 1, 2021 and can be accessed at
pc.projetsrouge-rougeprojects.pc @canada.ca An expanded version of this story as well as images is available at www.bluffsmonitor.com

Images Showing the Current State of the Park