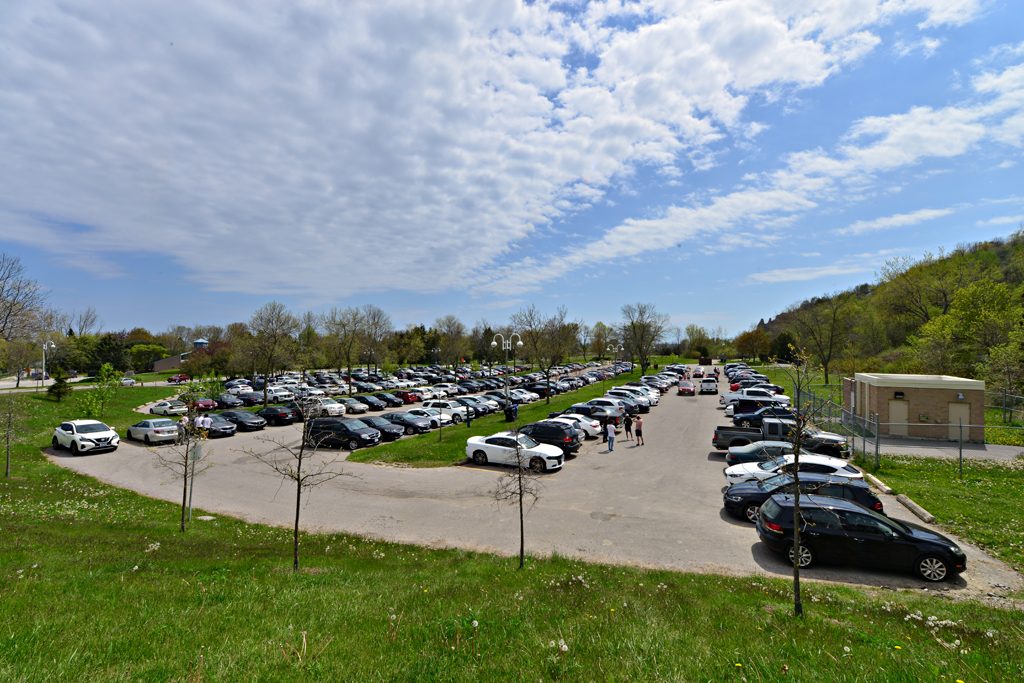 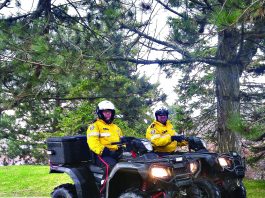 As Covid 19 cases in Toronto decrease, businesses and public areas continue to reopen, including Bluffer’s Park. The TTC # 175 bus service has resumed, and people are coming to the beach and hiking trails in droves, anxious to get outdoors and experience the sun, beach, and parklands. On a recent Sunday morning the Beach parking lot was already full at 9:30.

Some changes have also appeared. There is now a fleet of bylaw officers patrolling the beach park, and an increased police presence at the top of the Brimley hill on weekends. The “No Left Turn” and “No Entry” across Kingston road rules are now being enforced, the only entrance to the park on weekends and holidays being a right turn coming east on Kingston Road. The Beach parking lot is now closed at 11:00 PM instead of 12:00 and the yacht clubs have all launched their boats. The take-out counter in the Marina building is open longer hours for breakfast, lunch and dinner, from 8:00 AM to 9:00 PM.

In the natural world, animals are also entering their summer routines, raccoons, fox, red or grey squirrels and birds all out, big raptors soaring overhead, always beautiful to see. In addition to these local species many non native creatures live in and around the park, invasive species that have arrived in discharged ballast water, transported firewood, as fish or insects used for bait, even seeds on vehicles or clothing.

Some species new to the Scarborough waterfront have caused minimal damage, but others are affecting the environment . Zebra Mussels filter microscopic food sources and plankton from the lake, altering its food chain and causing clearer water that allows sunlight to increase aquatic vegetation. The resulting toxic blooms impact fish and wildlife.

Round goby fish prey on the eggs of native bottom-dwellers, threatening some Great Lakes species already at risk, like the eastern sand darter and freshwater mussels. They have also been linked to outbreaks of botulism in fish and fish eating birds. This disease is believed to be caused by toxins in the zebra mussels they eat, then pass up the food chain, resulting in die-offs.

The four subspecies of Asian carp, though still rare, also concern biologists as these fish are large, (up to 100 lbs!) and aggressive competitors. The overall threat from any non native species is their potential to dominate competitors and harm an area’s natural diversity. An excellent online resource on this topic is www.eddmaps.org (Early Detection and Distribution Maps) which lists hundreds of plants, insects, and animals, and provides maps where they have been sighted.

One species of special interest in Bluffer’s Park is the double crested cormorant. While not technically invasive, (they were sighted in the 1700s on Lake of the Woods) they are relatively recent migrants,
first appearing in small numbers over Lake Ontario in the 1930s.

Their populations have fluctuated over the years, but since 2000 have steadily grown, huge flocks of them now regularly seen off the shores of Toronto and Scarborough, some containing 1000 or more birds. At least 14,500 cormorant nests were surveyed in Tommy Thompson Park in June 2018, the largest roost in North America, each adult estimated to consume 1 pound of fish per day. In numbers like these, Lake Ontario cormorants, currently a protected species, have become the subject of debate. In November 2019 the Ford government began work on legislation to class them as game birds that can be hunted from shore or a stationary boat from March to December, with a bag limit of 50 per day. This strategy is in dispute between ecologists and birders, and groups like the Ontario Federation of Anglers and Hunters. “Bird Studies Canada” opposes the bill because, in their view, it lacks scientific credibility, including an accurate knowledge of the cormorant population, and outlines a long hunting season. As of June 2020, the Bill is still under consideration.

In the meantime, now that summer is here, people animals, and yes, cormorants, are getting back to their normal activities in the park, so come out and enjoy. But, as one Bylaw Officer advised me on a recent trip, when you do visit, be sure to practice safe distancing and follow the rules.

~Jim Sanderson is a local resident, and the author of Toronto Island Summers, and Life in Balmy Beach.