A Helping Hand Up for Local Entrepreneur 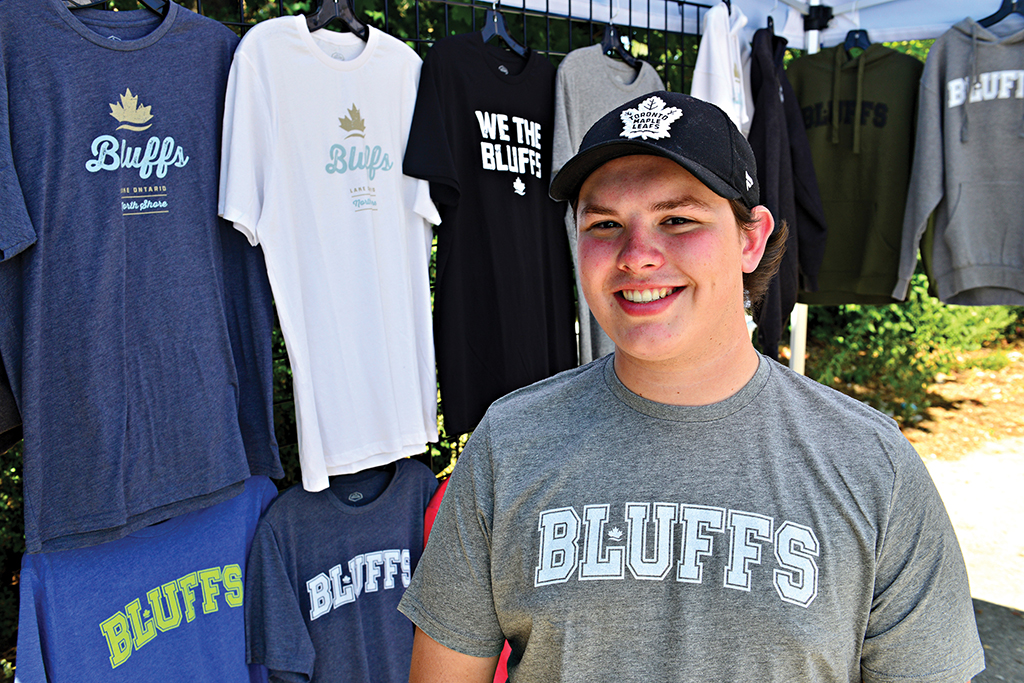 With a love for the Scarborough Bluffs and seeing a gap in the market, Logan Switzer began his own Bluffs-themed apparel business called Bluffs Gear during the pandemic. Switzer, a 21-year-old student at Guelph University, runs the business with the help of his family and neighbours. “We’ve been working with our graphic designer, Brenda MacDonald, who also lives down the street from us in the Bluffs area,” said Switzer. “We’ve been coming up with multiple different designs. Originally, we had 40 different designs, and then we cut it down, made a survey, and sent it to friends and family in the neighbourhood.” Bluffs Gear sells varsity-lettered t-shirts ($30), light-duty sweaters ($55), heavy-duty embroidered sweaters ($85), zippered hoodies ($60), ball caps ($25) and bags ($15). The designs come in several colours, ranging in size from XS to XXL, and feature stylized phrases such as ‘Bluffs,’ ‘We the Bluffs,’ and ‘Bluffs, Lake Ontario, North Shore.’

“This year was kind of a test-run,” said Switzer. “We’re hoping by next year, if we have enough interest, we’ll have a Canadian supplier with Canadian-made clothing lined up.” Currently, Bluffs Gear has sold apparel at local pop-ups located by established Cliffcrest and Cliffside businesses. The Dairy Queen at Kingston Road and St. Clair Avenue East held a weekend Bluffs Gear pop-up event from August 14 to 15, 2021. A Bluffs Gear pop-up also made an appearance at the Cliffside Village Festival on Saturday, August 21 with support from the Tara Inn. “Logan is a very personable and industrious force to take notice of,” said owner of the Tara Inn, Wayne Reddy. “His line is going to be a bond for a large community. I’ve lived along Kingston Road and [the] Bluffs for over 55 years now and it is great to see his branding for the area be inclusive of the entire Bluffs, unlike the branding of the Beach.” It is likely that Bluffs Gear will hold several more pop-up events in the future, which will be announced on their Instagram page and website. Bluffs Gear’s official website is expected to open this week for online sales, which will allow Bluffs alumni from across Canada to show their love for the community.

When asked about his experience at the pop-ups, Switzer said that the highlight was “Not people congratulating us, but excited to see that they can represent the Bluffs area. That’s probably the best part for us.” Although Switzer will be returning to university in the fall, he is confident that his family will step in to manage online and pop-up sales. As for the future of Bluffs Gear, Switzer is already taking notes from his customers and is planning to expand the apparel line by summer 2022.

~ Janet Monk is an Author and Copy Editor with an HBA in Creative Writing, History, and Music and Culture from the University of Toronto – Scarborough. To make an inquiry or leave a comment, please send an email to janet.monk@alum.utoronto.ca.