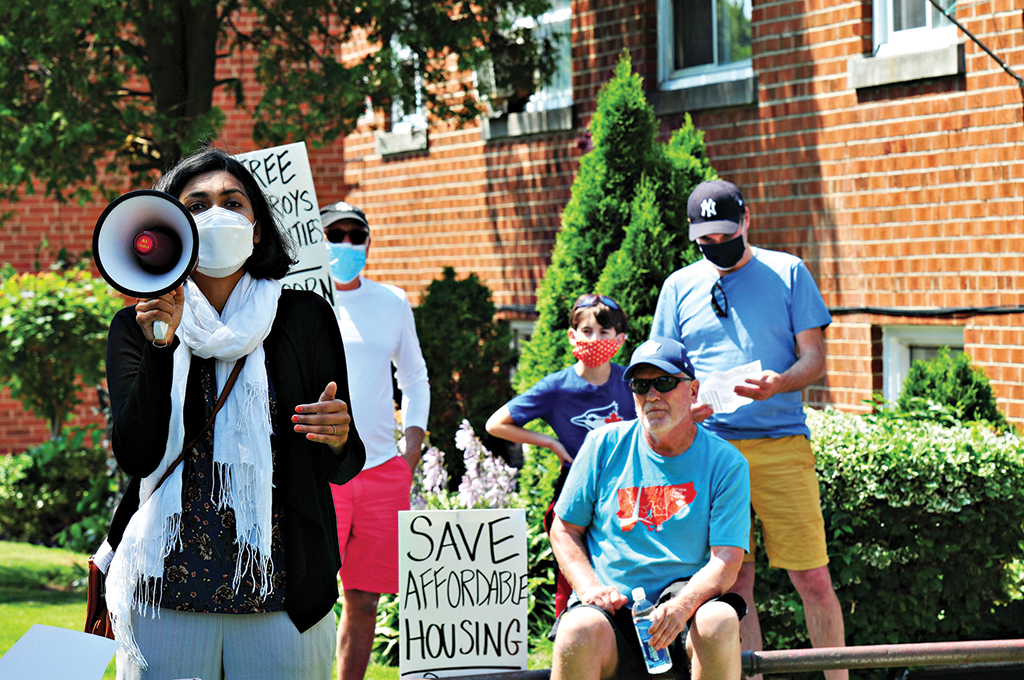 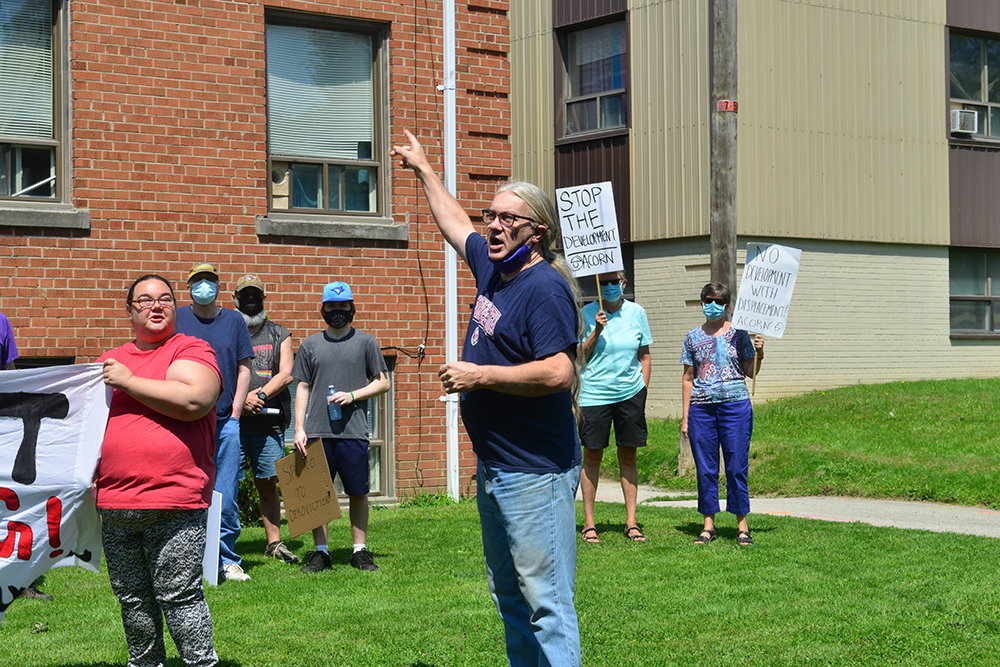 Demovictions Continue ~ Glen Everest is Next

Tenants in three low-rise apartment buildings on Glen Everest Road are fighting to save their homes from a developer who plans to tear down their affordable rental buildings and replace them with a new 12-storey condominium.

This is the third time in a year that the developer, Altree Developments, has swooped into the Birch Cliff-Cliffside neighbourhood to purchase land near the Bluffs for condos with a view of Lake Ontario.

This latest “demoviction” affects tenants in 68 units at 54, 58, and 62 Glen Everest Road, located across Kingston Road from the Scarborough Cenotaph.

Many of the tenants are seniors, single parents, and people living on disability payments according to Cindee Berry, a 53-year old single mother who shares a $968 one-bedroom apartment with her college-aged daughter.

“They’re mad. They’re worried. They’re anxious,” Berry said in an interview on the front lawn of her well-kept building, when asked to describe the mood of her community.

Berry has launched a petition to try and stop the project, and so far more than 170 people have signed in an effort to preserve affordable housing in the neighbourhood.

Given that Toronto has an affordable housing crisis, Berry said she can’t understand why the city allows developers to tear down existing affordable buildings in order to increase corporate profits.

“[They’re] going after low income areas,” Berry said. “We have rights. We belong. We deserve to have a home. We’re not bad people. Why can’t we live somewhere?  Honestly, why are they pushing us on the streets?

Altree has applied to the City of Toronto for a Zoning By-Law Amendment to build a 12- storey residential building with 427 units and a gross floor area of 31,410 square metres. According to City of Toronto Planner, Kelsey Taylor, the application includes a mechanical penthouse on top of the 12th storey for a total height of 43 metres.

Altree, which did not respond to requests for an interview, says in its application to the city that the proposal “represents good planning and urban design” in a neighbourhood that has been targeted for revitalization for more than a decade.

Altree says the development is in alignment with a 2009 revitalization study and the Cliffside Community Zoning By-law, which seeks to “…support a vibrant, self-sustaining mixed-use community with distinct character and features that set it apart from other communities on Kingston Road.”

While revitalization of the Kingston Road corridor has been a long-term community goal in both Cliffside and Birch Cliff, the shared vision is proving increasingly stressful for low and moderate income tenants being pushed out of their apartments.

In Birch Cliff, there has been robust opposition in recent months to another proposed Altree development that would displace 32 families to allow for the construction of a ten-storey building covering almost a full city block.

While the development is still winding its way through the application process, furious lobbying by the Birch Cliff Village Community Association has forced Altree to back down on its plan to force the tenants to relocate out of Birch Cliff permanently.

But there’s no community association in Cliffside to fight for the Glen Everest tenants.

At a meeting on the lawn of 58 Glen Everest on Monday evening, about 25 tenants made an impassioned appeal to Ward 20 Councillor Gary Crawford, asking him to stop the demoviction.

“Where are we going to go?” Berry said to Crawford with tears in her eyes. “There is nothing in our community for rent. They’re pushing us away from what we know is our home, our family, our friends, our loved ones, taking away the stability that our children have…”

Berry said she’s done her research on what it takes to find an apartment in Toronto, where rents on a two-bedroom apartment increased 46% from 2010 to 2020.

“They want excellent credit. Three pay stubs. You know what that’s saying? That’s saying that they do not accept low-income families. They jack the rent up anywhere from $1,400 to $3,000. Nobody here can afford that, right?”

While Crawford expressed empathy for the tenants, his initial remarks to those gathered on the lawn were informational and procedural and he mentioned that Toronto needs more housing for the 30,000 people who move to the city every year. He was interrupted by Berry and other tenants more than once until they secured a commitment from him.

But a no from City Council is likely to wind up with an appeal to the Local Planning Appeal Tribunal (LPAT), where there’s a good chance the development will be approved because it meets local planning guidelines.

Crawford, along with City Planner Graham Haines, assured the tenants that if the development is approved, the city can take steps to protect the tenants’ rights.

Haines said the city can guarantee the tenants a similar-sized apartment in the new building at the same rent that they currently pay, with the standard annual guideline increases.

Haines also said the city will ensure the tenants receive six months’ notice and provide them assistance to find somewhere else to live for three years while the new building is under construction.

Ontario law requires three months compensation to help pay the higher rent of another apartment. But Haines said the city is able to ensure at least eight months of compensation with payments increasing on a sliding scale for tenants who’ve lived in the building for a long time.

Even better, Haines told the tenants to lobby for a “rent gap payment”, which has been approved in similar situations in the past.  Essentially, a rent gap payment would allow everybody to stay in the neighbourhood for the duration of construction at no extra cost.

“On the compensation side, you should not be out of pocket at all for that period of time while you have been displaced or however you want to call it. That’s just the minimum,” Crawford said. “I want to alleviate as much of your frustration, as much of your anger as we can because it’s not fair to you to be going through this.”

As the meeting ended Crawford said he and his staff will stay in close contact and host monthly meetings to support the tenants in their goals.

The tenants made it clear, however, that compensation is well and good but they love their community and want to keep it the way it is.

“We want to save our homes. We want you guys to turn around and say, ‘You know what, there’s already affordable homes here. It’s a beautiful community. Why don’t you build your condo or your 427 unit-building somewhere else. Let these people have their community.’ This is what we want,” Berry said.

~ More from local journalist Hedy Korbee
can be found at www.birchcliffnews.com/