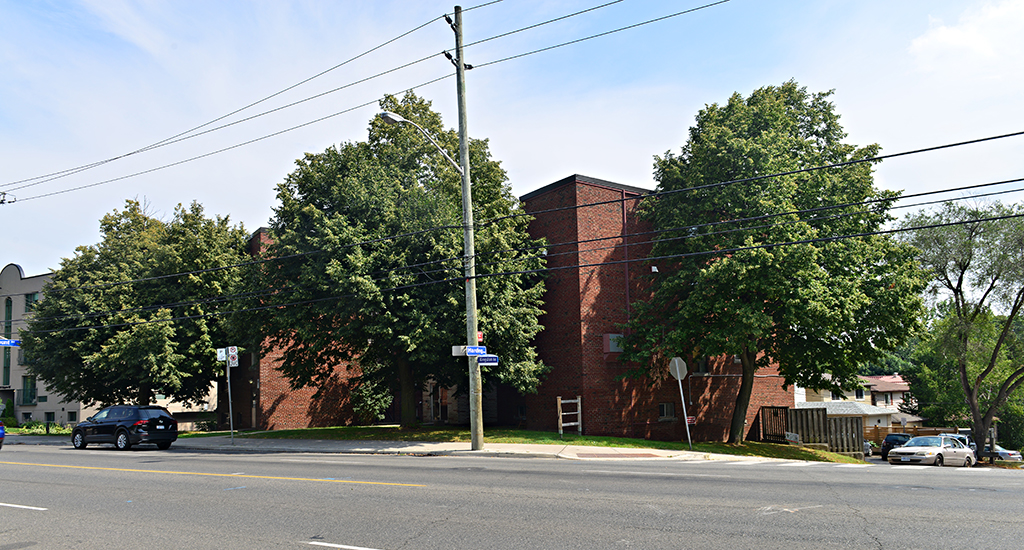 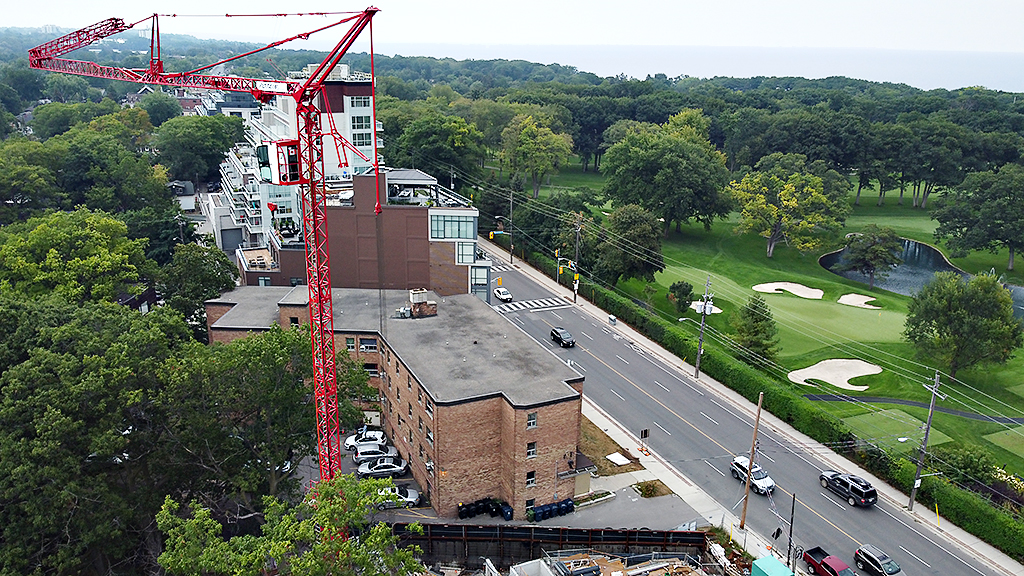 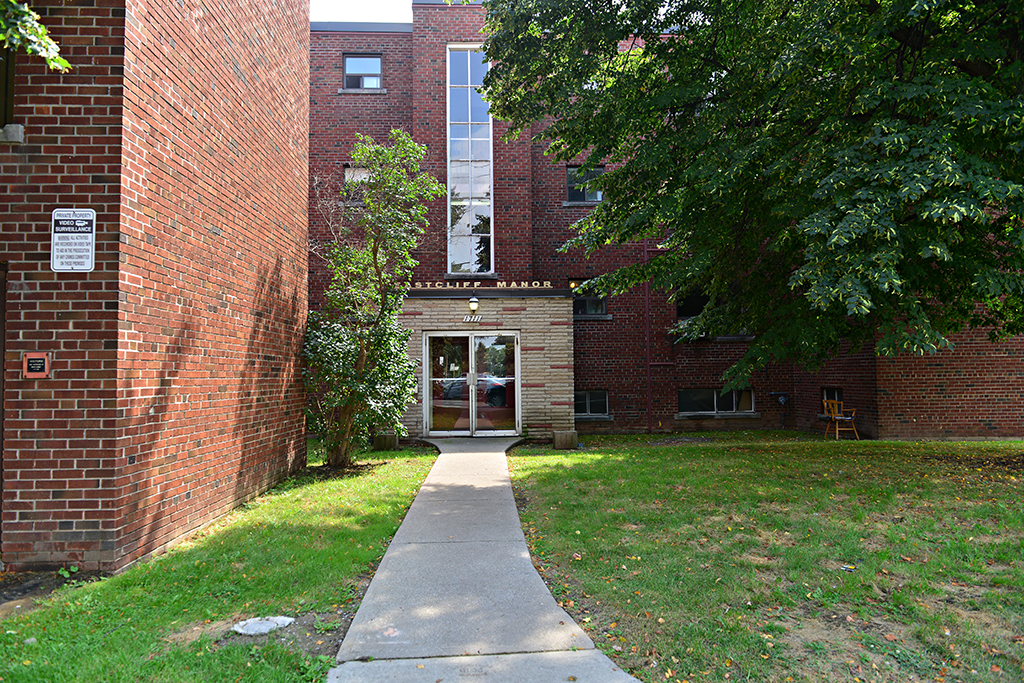 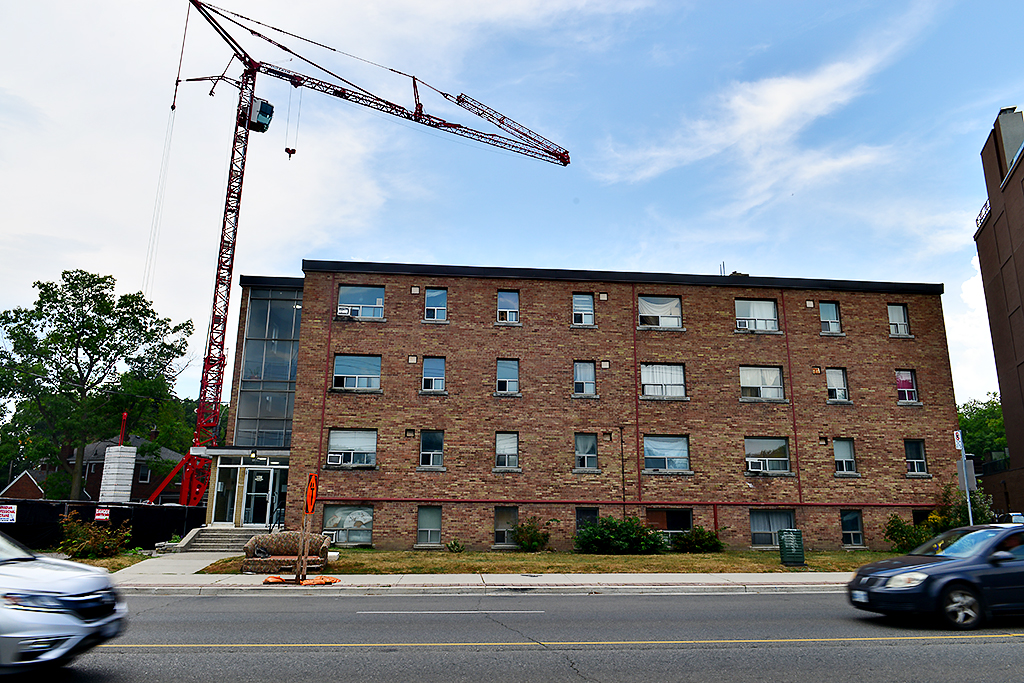 Two more affordable apartment buildings in Birch Cliff have been targeted for redevelopment, which means there are now four proposed “demovictions” in the neighbourhood affecting tenants in a total of 155 rental units.

The latest buildings facing demolition are both four-storey walk-up apartments located at 1711 Kingston Rd., at the southeast corner of Harding Boulevard, as well as 1336 Kingston Rd, west of Queensbury Avenue.

If the applications are approved, it means tenants in both of the buildings will have to find somewhere else to live for two or three years while the buildings are constructed before moving back into apartments of similar size and rent. Some of the costs are expected to be subsidized by the developer.

Peter Stanfield* has lived at 1711 Kingston Rd. for 13 years and pays about $1,000 a month for his two-bedroom apartment. He doesn’t relish the prospect of being forced out of his home in the midst of a pandemic.

“This whole ordeal just adds to the COVID stress,” Stanfield said. “Nobody’s really been able to work that much during the last year-and-a-half or more. The government money that they’ve been helping us out with is coming to an end as well. Then there’s the stress of having to face demoviction and nobody knows how long that could be.”

Rob Carmichael, chair of the Birch Cliff Village Community Association, said the city needs to do more to help tenants who are being demovicted into a market where rents are skyrocketing.
The association has been waging a robust fight on behalf of tenants at Lenmore Court and is paying close attention to the demolition of 54, 58, and 62 Glen Everest Rd. in Cliffside.

“To get equivalent space in Toronto today, they’re gonna be looking at paying 50% to 70% more than current,” Carmichael said. “They’re just picking off these buildings. And there is absolutely no plan. The plan is basically to give them some money, which is completely inadequate and then let them find something else. That’s not a plan. If we knew that development was going to happen on Kingston Road, and there’s a lot of affordable housing on Kingston Road, then why didn’t we plan for this?

Details of the Applications

The site plan control applications filed with the City of Toronto for 1711 and 1336 Kingston Rd. indicate that both addresses will be redeveloped as purpose-built apartment buildings as opposed to condominiums.

At seven and eight storeys respectively, they would exceed the current zoning, which permits a minimum height of two storeys and a maximum height of six storeys, not exceeding an overall height of 20 metres excluding rooftop mechanical penthouses.
According to City of Toronto planner, Kelsey Taylor, a proposal that does not comply with the current zoning but is consistent with the general spirit and intent of the zoning by-law is allowed to proceed as a minor variance provided it’s approved by the Committee of Adjustment.

This means that neither development requires approval from Scarborough Community Council or the full Toronto City Council.
Tenants of 1711 Kingston Rd. said NJS Capital has owned their building for several years and they have their own complaints about mismanagement. They said they’ve had to fight with the company for routine maintenance, including repairs, hallway cleaning, and lawn mowing.

“This is not a developer coming in with a strong development mindset or vision… as to how they’re building a community. This is somebody literally wanting to turn a profit, a quick profit on real estate. The problem is that real estate is occupied by people paying affordable rent. I don’t think we should prioritize sort of what I’ll call real estate flipping over people’s homes,” Carmichael said.
Birch Cliff News contacted Ari Nemetz, principal and managing director at NJS Capital, to discuss development plans for the two buildings. He said he was not available for an interview before Sept. 10.

In an interview, Ward 20 Councillor Gary Crawford said he’s concerned about the growing number of low and middle-income tenants facing “demoviction” in Birch Cliff and all along the Kingston Road strip.

“I am very alarmed that this is taking place not only one or two [buildings], but it seems to be a pattern that is now taking place along Kingston Road with regard to rental replacement. I’m very alarmed and very concerned about this. And I now need to really look at this seriously and figure out the next steps, Crawford said.”

Crawford is organizing a meeting with the City of Toronto’s Housing Secretariat, which has a mandate to “create and maintain safe, affordable, rental and ownership housing for lower-income residents.”
The secretariat is expected to release a report this fall on “renovictions”, the practice whereby landlords illegitimately evict tenants under the guise of renovations but then don’t follow through, raise the rent anyway, and refuse to allow the tenants to return.

Crawford said he wants the city to explore a similar study of “demovictions”, like those happening in Birch Cliff.
Crawford also plans to meet with the city’s planning and legal departments to discuss several issues, including requiring development applications to include local rental replacement plans to reduce the impact on neighbourhoods.
By way of example, Crawford points to 2380 Kingston Rd., where a developer has purchased two properties. The developer is constructing a new apartment on a vacant lot and will use it to house tenants displaced from a pre-existing building while their building is under construction.

In the meantime, Crawford said the best opportunity for action is to negotiate strong tenant protection provisions on a site-by-site basis.
Instead of tenants being offered relocation money on a sliding scale based on their tenure in a building, Crawford said they should demand “rent gap payments” that cover all of their costs during temporary displacements.

Crawford said he also wants to explore the possibility of slowing down applications for the redevelopment of existing rental apartment buildings in order to allow further study on how to protect low and moderate-income tenants.

The plight of low and middle-income tenants is front and centre right now but bubbling under the surface is the overall densification of Birch Cliff, which has some people referring to Kingston Road as “Condo Canyon”.

Development in the neighbourhood has been guided by the Kingston Road Revitalization (Birch Cliff) Study that was approved in 2010 after years of consultation with a community growing weary of its tawdry main thoroughfare.

Edward Nixon, a Birch Cliff resident and consultant with extensive community development experience in the St. Lawrence Market district, said what we’re witnessing now is a natural progression in the revitalization process.
He’s in favour of six to nine-storey mid-rise buildings on Kingston Road to improve walkability and the vibrancy of the community.

“A lot of people want the village feel and they want little local shops, but they don’t want any change and they don’t want any new people moving in. Emotionally, I get it. But practically, that kind of logic just falls apart because it just doesn’t actually work. The reason we’ve had empty storefronts in Birch Cliff is because no one’s patronizing the businesses,” Nixon said.

However, Rob Carmichael said the shared community vision that emerged more than a decade ago didn’t call for buildings this tall or the widespread displacement of tenants.

“It seems to us that affordable housing is being targeted, while the more obvious redevelopment spots are still there,” Carmichael said. “So the focus was meant to be on the businesses that haven’t existed for 20 years, or the awkward automotive used car sales or old garages. But the reality is that many of those still exist, along Kingston Road. And it’s been the affordable housing that’s been targeted. That wasn’t the intent of revitalization of Kingston Road.”

Crawford described what’s happening now as an unintended consequence that needs to be balanced to protect vulnerable tenants but also respect the rights of private developers.
“Can we have that balance between the desires and the needs of a growing city to have more people living there, but also acknowledging that there are people who still need to have affordable housing? We need to figure out how do we balance that out,” Crawford said.

* Peter Stanfield is a pseudonym. He is a tenant who asked that his name not be included in the story.
~ Hedy Korbee is a journalist who lives in Birch Cliff. You can read more local stories from Hedy at http://www.birchcliffnews.com/ 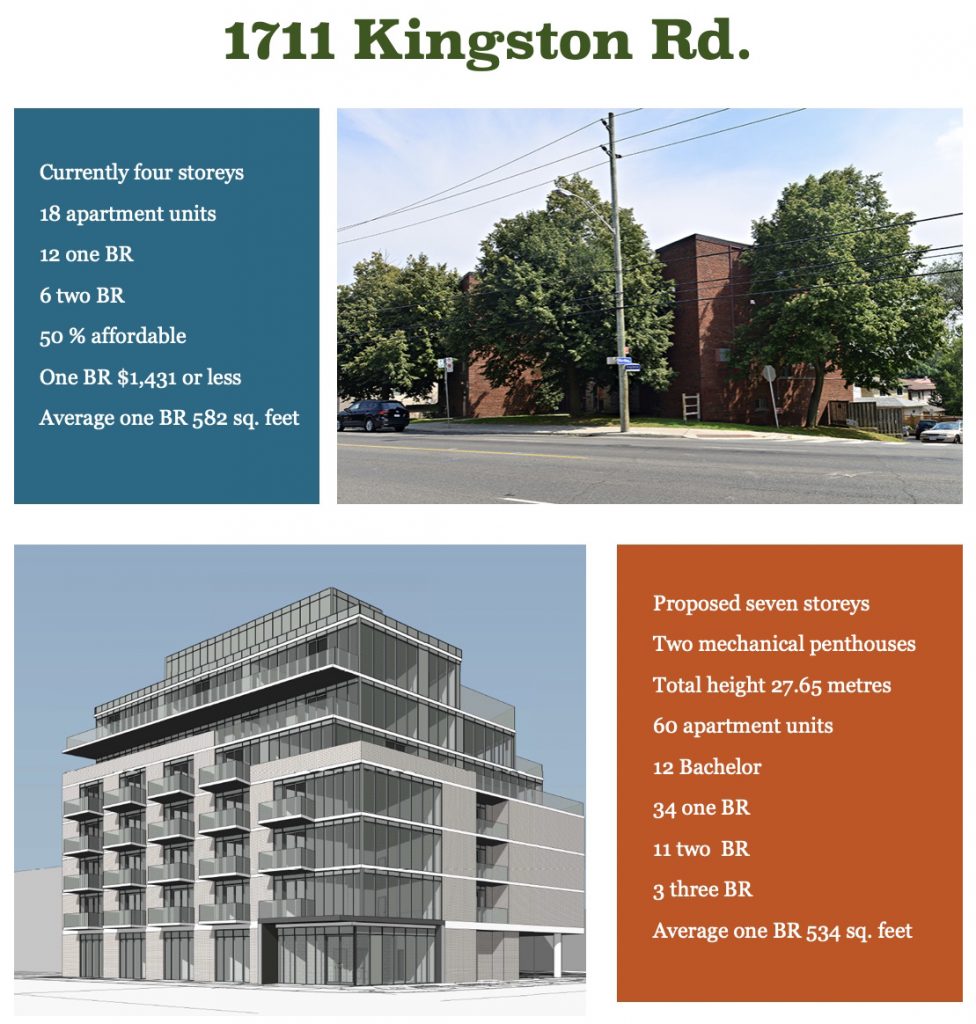 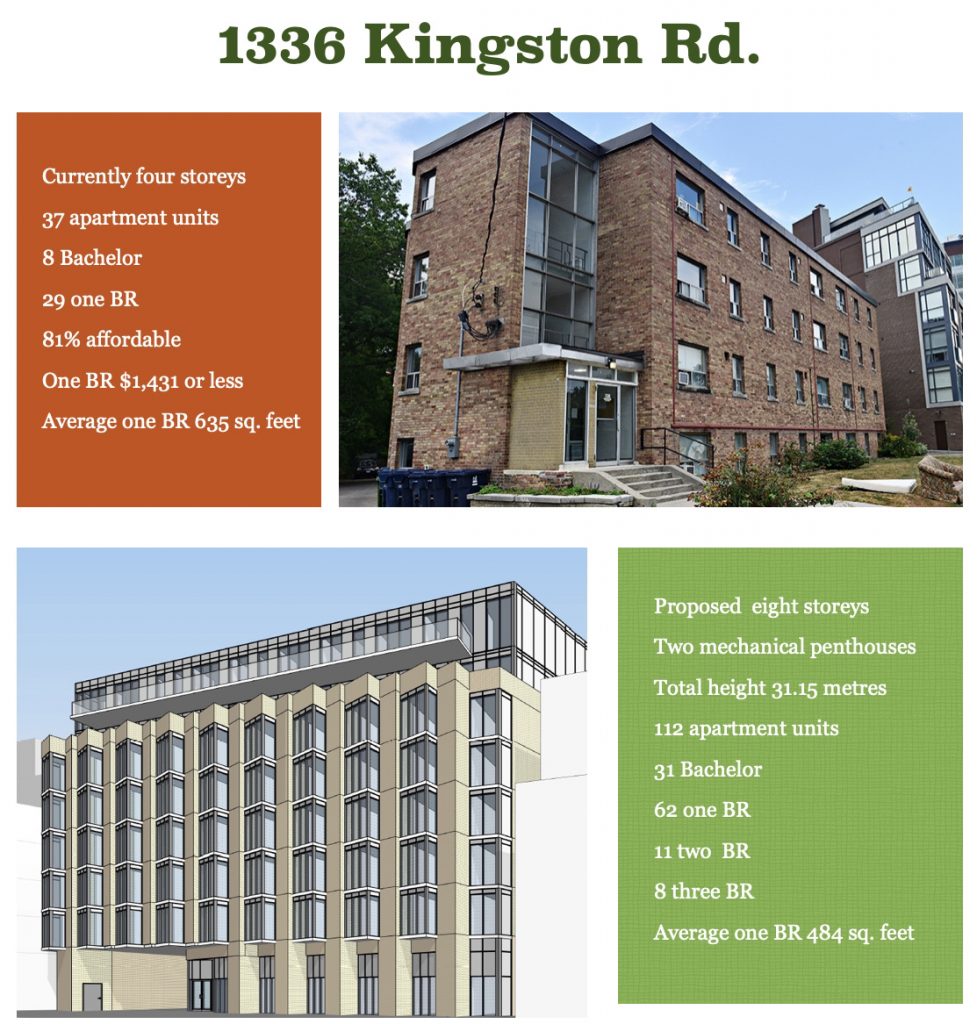