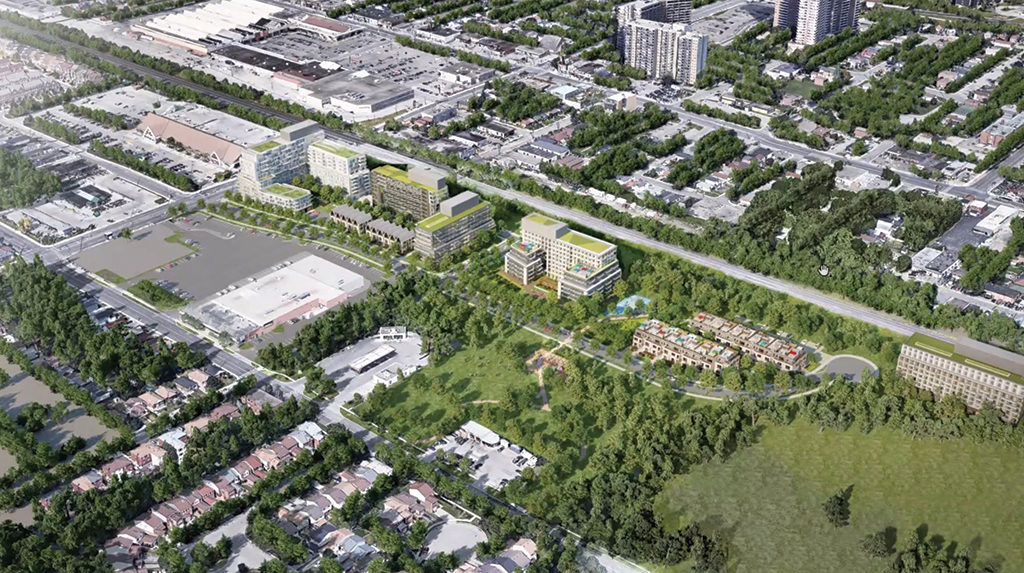 There’s a possibility that a new elementary school will be built in the Quarry as part of the 19-acre subdivision proposed for the vacant land east of Victoria Park Avenue and north of Gerrard Street East.

Developer Diamond Kilmer, which is building on the western portion of the Quarry lands, said a public school board has expressed interest in acquiring property to build an elementary school to accommodate 570 students and teachers.

The information was revealed at a virtual community meeting on April 26 to discuss Diamond Kilmer’s latest submission to the city for an Official Plan amendment, rezoning, and a draft plan of subdivision approval.

“It would be a kindergarten to Grade 8 school with a daycare facility,” said Melissa Walker, development director of Kilmer Group. “The building would be a three or four-storey building, approximately 5,600 square meters, which is about 60,000 square feet. It’s envisioned that there’ll be one level of underground parking with surface parking at the back along the rail corridor.”

Walker said the public school board has asked to remain anonymous for now while they work to secure funding for the new school.

In an email, spokesperson Julie Vanghelder confirmed that the French board has been reviewing options in east Toronto but has no further comment at this time.

Impact on the neighbourhood

If the new school goes ahead, Walker said it will be a great addition to the neighbourhood.

“It further creates what we consider a complete community, for families, new families, and the existing community. It really is a meaningful public benefit in and of itself. In addition, the school will feature significant open space that we would anticipate could be available to the public for active play and their own recreational uses in the off hours when the school isn’t operating and on weekends,” Walker said.

In an interview, Ward 20 Councillor Gary Crawford stressed that nothing has been confirmed but said a new school would be a positive development for the community because most local schools are at 100% capacity or over capacity.

“Every meeting I’ve had around new development in the area, the issue of public schools always comes up in terms of capacity. So I think this will offer that opportunity to manage that concern,” Crawford said.

There will be a total of 1,052 units with an estimated 1939 new people moving into the neighbourhood, according to the developer.

932 of the units will be sold at market value and there will be 120 affordable units, which is a ratio of 11%.

The townhouses will be built through the Habitat for Humanity affordable homeownership model.

createTO, the real estate division of the City of Toronto, will own one eight-storey apartment building with 50% affordable rental units.

If the school is built, it will replace a nine-storey condo building in the middle of the subdivision. That would reduce the overall number of units from 1052 to 849 and the total number of people moving into the neighbourhood to 1607.

The developer also released preliminary artist’s renderings of the Nordic-inspired design of mid-rise buildings and townhomes. Walker said there will be further refining of the design details, building materials, balconies, amenity areas and outdoor landscaping through the site plan application process, which comes later.

Primary vehicle access to the site will be through the intersection at Victoria Park and Musgrave Street, which is being extended eastbound across Victoria Park into the subdivision.

There will be a second access street between Musgrave and the railway tracks that will be restricted to northbound cars that are turning right.

At this point there is no road access to the subdivision from Gerrard Street East, raising concerns about linking the new development to the Hunt Club neighbourhood to the south.

It’s anticipated that the new 4.5 acre park will draw users from south of Gerrard Street who will have to utilize the existing crosswalk on a stretch of road known for high speed traffic.

Diamond Kilmer’s latest application for an Official Plan amendment and rezoning is its fourth submission since December 2019 and part of the usual back-and-forth process with the City.

The developer has held four community consultations, well above the statutory obligation of one meeting.

Walker said Diamond Kilmer hopes their application will go before Scarborough Community Council for a final decision by the middle of this year.

Site preparation is slated to begin in June of this year to prepare the development blocks, public roads and parks ahead of construction.

A decision on whether the school will go ahead is expected by the end of 2021.

~ More from local journalist Hedy Korbee
can be found at www.birchcliffnews.com/