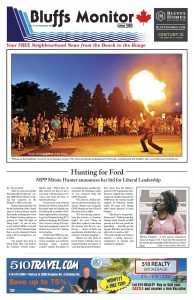 By: Trevon Smith
After six years serving her Scarborough-Guildwood riding, MPP Mitzie Hunter is taking her expertise to the Premier’s office next year.
Hunter announced her bid for the leadership of the Liberal party in a press release earlier this month, outlining her vision for Ontario’s future and her eagerness to “take the fight to Doug Ford.” Continue…

As one of only seven Liberal MPPs re-elected in June of 2018, Hunter hopes that a newly rebooted Liberal party will be enough for a win in 2022.
“As people lose trust in Doug Ford, they will look to the Ontario Liberal party,” Hunter said. “When they do they need to see that we are a new party with new faces, new voices and ideas for how to lead the province.”
In just over a year of being Premier of Ontario, Doug Ford has made large and abrupt cuts to funding for a number of different organizations, including: Legal Aid Ontario (losing $133 million in funding), the Ontario Arts Council (losing $10 million) and a program to plant 50 million trees lost $4.7 million in its funding.
OSAP and OHIP saw disruptive changes as well. A free-tuition program was cutback, meaning some students couldn’t qualify for grants to cover their tuition, and free prescriptions for Ontarians under 25 was removed from the OHIP-plus plan.
“It’s close to a billion dollars out of post-secondary education,” Hunter said, citing the OSAP changes as one of Ford’s first deep cuts in office.
“It’s devastating, particularly for students in Scarborough,” she said. “Many of them have spoken to me about the choices that they’re now facing … Some of them are questioning whether they can continue with their program.”
Hunter not only plans to revert Ford’s cutbacks, but to expand funding and policy in ways that future-proof Ontario. Her vision lists the achievement of a 90% graduation rate, financial support for at-home-caregivers and the expansion of OHIP-plus for mental health support of Ontarian youths under 30 years old, among other plans directed at rural Ontario.
“The focus is on growth,” Hunter said. “Making sure that Ontario leads Canada in GDP growth and that our youth are graduating … that they get the support that they need and are able to live a positive life.”
“We need to make sure Ontario remains a strong province, competitive in Canada and competitive globally.”