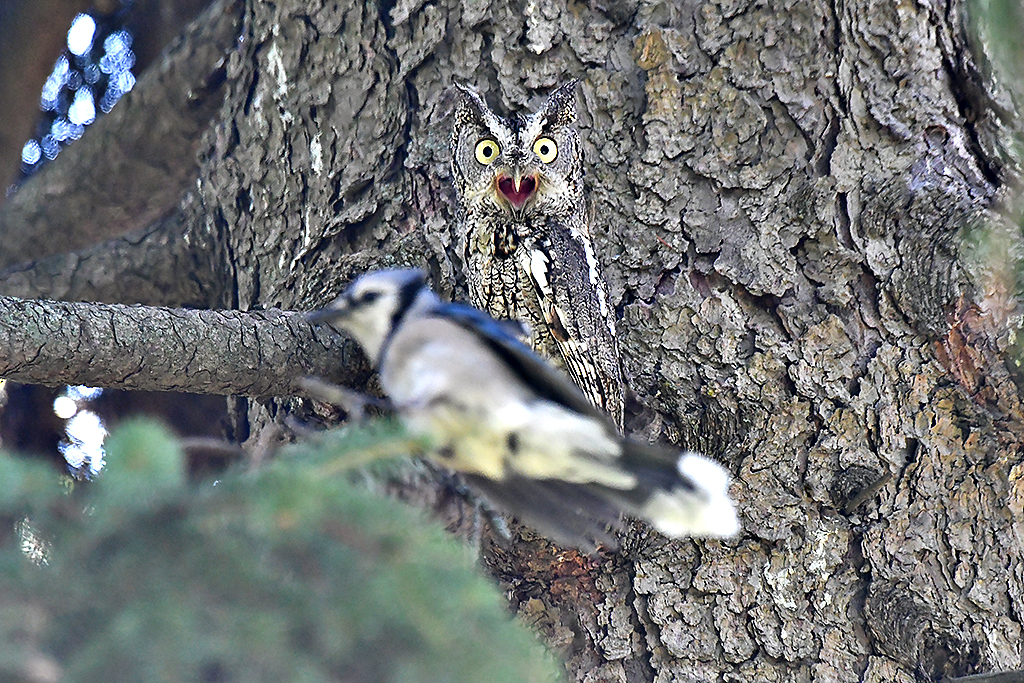 Standing in Rosetta McClain Gardens last September, I watched a flock of 15 birds fly overhead from the east. Since they were flying at about treetop level, I could immediately identify them as blue jays.

Within 10 minutes, another flock flew over. That morning, I saw more than 200 jays. They were clearly migrating.

But, as you all can attest, blue jays stay here in winter. They’re one of the delights of our backyards on a snowy day. This called for some investigation.

As it turns out blue jays do indeed migrate, except it’s a fairly low percentage. According to researchers, it’s between 10 and 20% of them. Regardless, the numbers migrating are still huge. Holiday Beach Conservation Area, a hawk-watching site located south of Windsor where the Detroit River enters Lake Erie, is likely the only place that keeps a daily count of migrating blue jays. It’s in the perfect spot because blue jays, like most raptors, don’t fancy flying over open water like the Great Lakes. Instead, they use the shorelines of Lakes Ontario and Erie as their guides, which is why I observed them passing by on that September day atop the Bluffs. (Would that make me a Bluffs monitor?) So, they’re funneled down to southwestern-most Ontario where they cross the Detroit River. Holiday Beach tallies an average of 292,000 blue jay sightings annually. However, on one mind-blowing day in September 2001, they recorded 264,000.

There are still 80-90% that remain up here in the north. Why do they stay, and others head south? Why do some migrate one winter, but not the next? Conjecture is that it’s based on how abundant food is up here in the north. Blue jays look for acorns, beechnuts, and hazelnuts – and they’re great hoarders of them. In late summer and early fall they bury nuts, particularly the acorns they love. One study tracked 50 birds for 4 weeks, during which time they hid about 150,000 acorns. That’s an amazing 3,000 acorns each or 107 per day.

Not all jays, however, are going to be that successful. Sometimes 3,000 acorns aren’t enough. After all, once winter arrives they have to go back and find those hidden nuts, maybe under snow. It’s thought that they can sense if that year’s crop is poor, and instinct drives them southward where food will be more plentiful.

Blue jays are great environmentalists too. They choose mostly high-quality nuts to bury and nuts that haven’t been infested by insects. Obviously, they won’t find all those hidden nuts. So, many will germinate and with luck grow into mature trees, covering up some of the mistakes we humans have made. On abandoned fields or on land where we’ve cut down forests, acorns can grow into mighty oaks or speed up regrowth after a forest fire.

The sun is up, the jay is blue

It’s getting late, the sun goes down

Mysteriously, the jay turns to brown.

Do our eyes deceive us? Is a blue jay really brown? Yes and no. Mother Nature is playing one of her tricks. When light strikes the individual barbs of a blue jay’s feathers, it encounters a layer of microscopic, bubble-like structures that contain air. Since these air pockets match the wavelength of blue light, the blue is reflected back, and that’s what we see. Other colors pass through the bubbles and are absorbed by a lower layer of the pigment melanin. At night, there is no light to reflect back. So, if we could see in the dark, we’d see the brown color of the barbs’ lower layer. So, is the jay blue or brown? That’s too deep for me