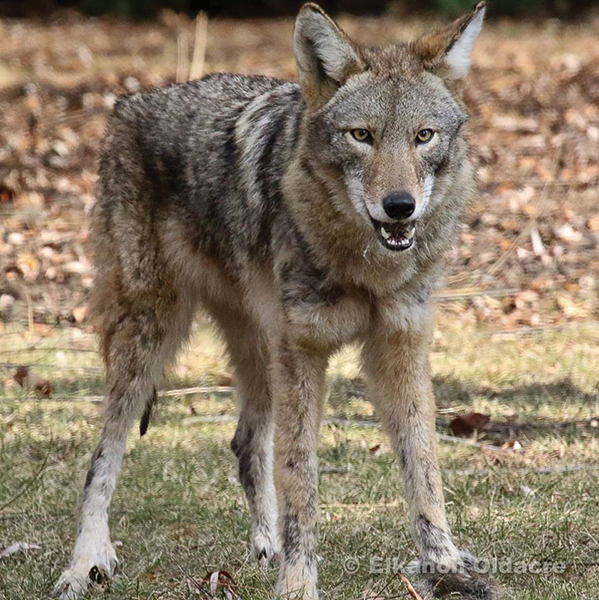 By Corey Cameron
Many people are alarmed when they see a coyote in an urban space. Coyotes do their very best to avoid people. They have a natural fear of humans. We see more of them because we continue to encroach on their territory. The key to humans and coyotes co-existing lies in us understanding the species and learning to share space with them. Coyotes are an important part of the ecosystem. The more you know about coyotes, the more you will realize that they pose little risk to you or your pets.
Coyotes prefer to live in forested and park areas but are sometimes forced into residential areas when they are out of options for food. They thrive in urban settings because of the availability of food and lack of predation.
Coyotes can build dens in very small spaces, making them difficult to find. If you do happen upon a den, leave it alone. Once a female coyote senses a human nearby, she will move all of her pups and attempt to den somewhere else.
Coyotes mate for life and it is believed that this plays a very important role in why they are so successful in urban settings. There are many more rodents available in urban settings, allowing larger litters to sustain themselves and survive. Urban coyotes surprisingly keep rodent and goose populations under control.
Geese? Really? Yep! Coyotes love goose eggs but will rarely take on an adult goose. For the most part, coyotes are nocturnal, beginning to hunt at dusk and ending at dawn. But mothers with pups will need to hunt more often, which is the reason you occasionally see them during daylight hours.

Coyotes will typically stick to a natural diet and are not particularly interested in your pets or your garbage, unless they are unusually desperate. The most common things found in coyote scat are rodents, fruit, deer and rabbit. They will occasionally take a feral or free-roaming cat but will rarely attack a dog, especially when on a leash with its owner.
When you hear about a coyote attacking a small dog it is usually because the coyote has become bold and aggressive due to being fed. You should never, under any circumstances, feed wild animals. A fed coyote is a dead coyote.
Other important things to know:
If you are being followed by a coyote it is because they are curious about you. They are not about to attack you. They might stand still and stare at you out of curiosity. You might be near a den or a food source, so they are watching to see what you’re going to do next. You are bigger than they are and they are frightened of you.
Howling coyotes are sounding off. Coyotes often hunt and travel alone and packs need to reassemble at the end of the day. The howling can be calling pack members, celebrating a kill or protecting territory. They can sound very loud and angry but they are just communicating with each other.
Never force a wild animal into a corner. Never feed them. If you hear a report of a coyote in the area, don’t let your pets out into the backyard alone. Step outside with them. Dogs should always be on a leash and cats should never free roam. If you see a coyote that doesn’t look well, call 311 and let them know. Always exercise cauton when around these wild creatures.