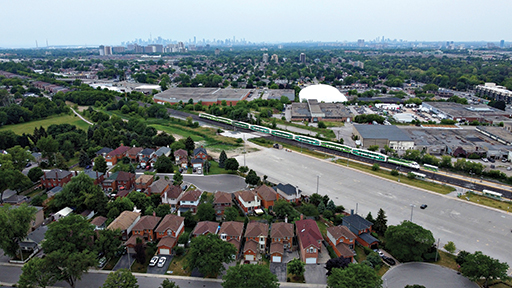 26-Acre Development will Transform the Scarborough Bluffs: Make Sure You Help Shape It

Seventeen condo towers ranging between 12 and 48 stories will someday rise from the triangular swath of land circumscribed by St Clair Avenue, Danforth Rd, Kennedy Rd, and the Scarborough GO station. Construction won’t begin for at least three years, but this summer is a perfect time to give your input on how this massive development should best serve and integrate into our neighbourhood. If the global pandemic has taught us anything, it’s that nothing functions in isolation. Even if you won’t live directly across the street from the project, we will notice its impact in the shops, roads, schools, libraries, skating rinks, and swimming pools we frequent in the Scarborough Bluffs. As long as it’s planned responsibly and strategically, this transformative development will enrich our ways of life, benefitting our local businesses and public amenities and improving the city’s allocation of resources to Scarborough. And who would know what community values should be top of mind for this new development better than its current residents?

What is the Scarborough Junction Project?

The ambitious “Scarborough Junction” project by Republic Developments, a real estate developer founded in 2019 by a former VP at
Capital Developments named Matt Young, aims to add 6,619 condo units to the cross-section of the Birchmount Park, Cliffcrest, and Scarborough Junction communities, alongside street-level retail, above-ground parking (as necessitated by contaminated soil regulations), a grocer, daycare, community centre, and stretch of parkland along the rail tracks. The current plans on the 26-acre site include a redevelopment of Scarborough GO’s St. Clair entrance, new winding side streets with designated bike lanes, tennis courts, and income-based housing allocations.
Assuming there are 2.5 people per household, we could someday welcome just over 16,500 new residents, about a 40% jump from the current Scarborough Bluffs population of 40,000. The current mix of units are as follows: 379 studios (5.7%), 4,509 one-bedrooms (68.1%), 1,058 two-bedrooms (16.0%), and 673 three-bedrooms (10.2%). Twenty percent of units will be designated affordable housing, as recommended by the city, though the city’s preliminary report mentioned that some buildings’ early floorplans are about 20% smaller than their preferred guidelines. To alleviate some congestion, Republic and its consultants hope that more frequent GO train service will discourage driving.

The proposal will ideally reimagine the commercial use of a sprawling site on contaminated soil. Its proposed site plan and architectural renderings have received support from the Toronto Design Review Panel, though the group noted that they wished to see a larger park in the development.

Given the scale of the project and various rezoning measures required, the many approvals to greenlight the project will occur piecemeal over several years. The project would break ground in three or four years at the earliest, and ideally finish in 16 to 20 years from today. We are in the early stages of the project, but this is the perfect time to get involved as the city planners are actively seeking community input on the proposal.

The most recent community consultation on Wednesday, May 26, featured a handful of questions and concerns about TTC routes and capacities, congestion, and a guarded apprehension over the developer’s potentially “too-good-to-be-true” promises on revitalization efforts and a new grocer. The meeting also entertained conflicting opinions on what share of units should be allocated to affordable housing, as one resident wanted to minimize low-income units over declining property value concerns, while an affordable housing proponent was eager to collaborate with the developer.

The city planning team is currently drafting feedback for the developer’s application documents, ideally taking into consideration concerns raised by community members. In the fall, city council will vote on rezoning the development’s land from employment-designated lands to mixed-use purposes. From that point, we can expect a steady cadence of community consultations, application revisions, and city approvals to reach the finish line. Monique Lisi, Councillor Gary Crawford’s Chief of Staff, reassures residents that Ward 20 will host ongoing community consultations beyond the minimum required by law throughout the
application process.

Why Offer Your Input

Whatever your thoughts about the project, I encourage you to share them with the city planner or our Councillor. According to Lisi, Republic Developments has been open to the community consultations. These consultations cater to what current residents, not future residents, want. In other words, your voice and priorities today carry incredible weight in shaping this project.
Whether you prefer smaller or taller towers, expanding the park, or adding a new swimming pool or skating rink on the block (especially since they will demolish the existing MLS Arena on Danforth Rd), make planning staff aware of your input. Lisi also encourages residents to think about what amenities you might want in the vicinity, not just amenities on-site, when it comes to infrastructure like pools, basketball courts, or rinks. After all, there will be public funds that the developer must contribute to the community, and you can influence how they are allocated. The Scarborough Bluffs is a mosaic of diverse perspectives, backgrounds, and socio-economic statuses; my only hope is that our city planners will balance our community’s many priorities in this development’s planning.

How to Get Involved