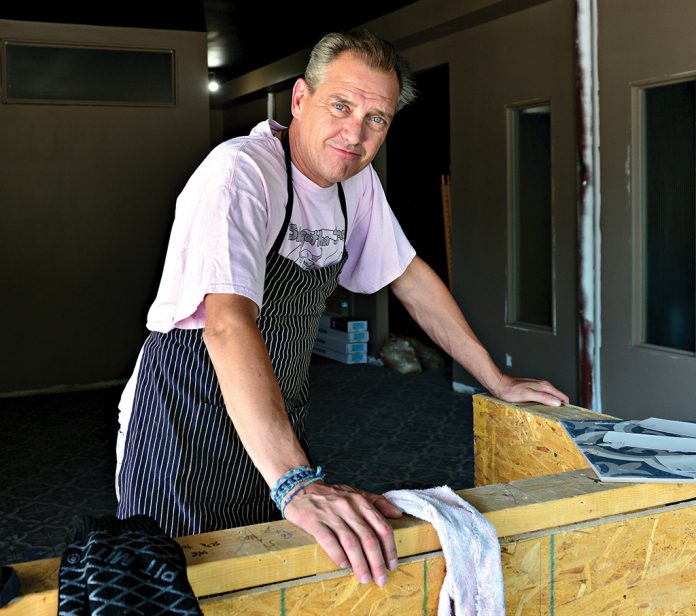 Rob Murphy taking a break; “This meant months of 14-hour days and many nights.” For more information www.goodtogokitchen.com

All In And Good 2 Go

Long-time Cliffcrest residents Rob and Marina Murphy and Darryl and Sarah Brown met 12 years ago. They all had different backgrounds but shared a passion for food and had been frustrated for years by the lack of specialty restaurants in the community. Darryl, an experienced restauranteur, proposed an idea to Rob in June 2019 to create their own concept restaurant and Rob was all in.

While Rob had gained business experience by running a recruitment agency for a time most of his subsequent jobs have been in sales. Darryl, on the other hand has been in the food service industry all his life starting out as a waiter until he eventually opened and ran his own restaurants and bars in Ottawa and in Toronto. His Toronto businesses were the Auld Spot Pub on Danforth Avenue and the Hog Town Pub on College Street which he operated for eleven years.

The idea was to create a restaurant that could provide multiple cuisines and varied dining experiences. Rob characterizes the concept as “the Swiss Army Knife of kitchens, something that can be handy and many things at once”. The plan is to offer a unique food experience that includes multiple food styles, take-out menus, private dining, catering, a butcher shop and deli and a flexible facility that can be customized to customer’s needs. With that the planning for “Good 2 Go Kitchen” was born. However, the logistics of making it happen has not been without challenges.

Their biggest initial hurdle was finding a location. They needed enough space to have a large, multi-use kitchen that also could accommodate different sized dining rooms for functions large and small with ample parking and they both wanted it to be in their community.
They both liked the first space they looked at, but it was far from a turn-key scenario. It had been vacant for nine years, was loaded to the ceiling with previous occupant’s rubbish, and was woefully lacking in infrastructure – insulation, heating and air conditioning, electrical services, and plumbing. These major deficiencies led them to look at 9 or 10 other potential commercial spaces however they felt all were wrong for the Good 2 Go business model. After nearly 2 months of fruitless searching, they ended up coming full circle and landing back at the first location at the corner of Bellamy Road and Nelson Road just north of Eglinton.

They knew this would significantly stretch their budget plans but wanted to get it right the first time. After consultations with Marina and Sarah, both of whom are also enthusiastic about the venture, they decided to do most of the required upgrades and repairs themselves. This meant months of 14-hour days and many nights. Just when they felt they were starting to see the light at the end of the tunnel they were hit with the Covid-19 freight train.
Because they hadn’t yet opened their doors when the Pandemic hit, they didn’t qualify for any government financial relief but, to make it worse, it also caused delays in getting some construction materials and needed equipment. They also realized that they might not be able to open every part of the Good 2 Go concept all at once so they retrenched and decided on a two phased approach.

Phase one of the opening, planned for late September baring any glitches, will introduce two different culinary experiences, an eighteen-seat dining room and dining within the kitchen itself. This will include food and wine pairings and cooking classes for adults and children. They plan to host on and off-site parties and corporate meetings. They estimate hiring a chef and six other staff. Phase two will include a larger format party room with the ability to accommodate up to forty people, and the butcher shop and deli retail components both of which will also require more staff.