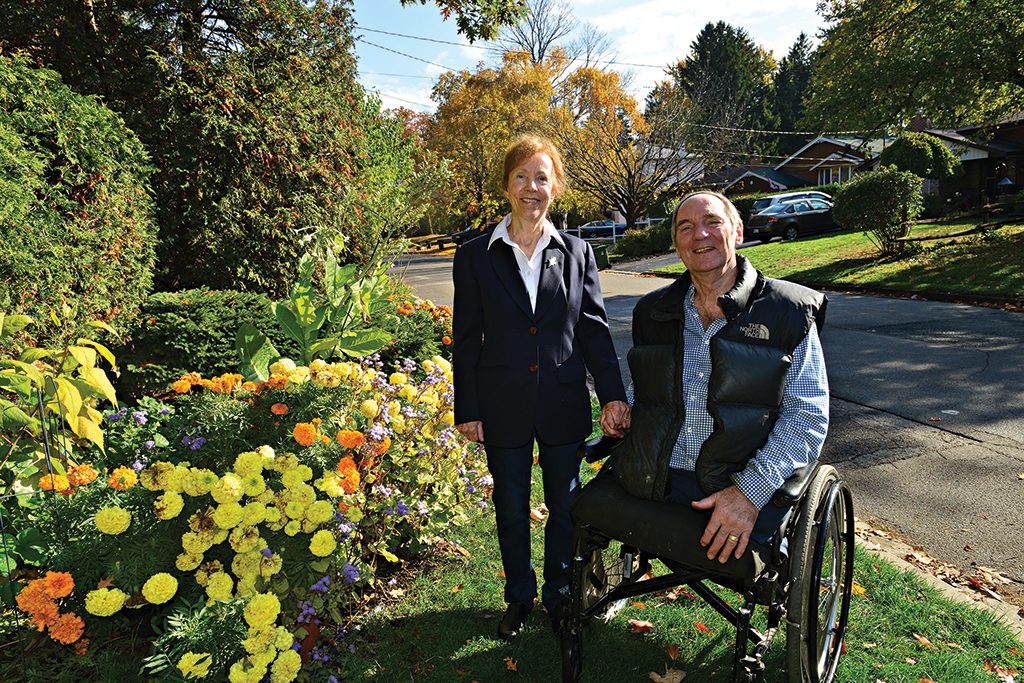 Fighting for a Special Neighbourhood

Mike and Pat first met in 1967 at the Canadian Sportsman’s Show. Both were in high school and fellow naturalists who had volunteered to staff a booth. They have been together ever since. Pat characterizes Mike as her centennial project.

I first met the Singletons a few years ago when a group of us were challenging several large infill housing projects. One proposal was a lot severance with two houses replacing one and the removal of several large canopy trees including the largest oak tree on Oakridge Drive. When Mike saw the proposal, he just said one word – “Disgusting.”

The Scarborough Committee of Adjustment approved the lot severance request, but our group let the developer know that we would be challenging him at the Ontario Municipal Board. To avoid that he asked for several meetings to strike a compromise. After three meetings, the first held in Councillor Crawford’s office, the developer agreed to leave the oak tree and only remove on large canopy tree. In the end we saved the oak tree, but the developer reneged on his word and removed eight large trees.

Mike and Pat moved into in our community in 1982 because of the trees. In Cliffcrest, most of us live in what used to be the woodlot at the back of the Neilson Farm. The farmhouse eventually became the McDougall Brown Funeral Home on Kingston Road. The ‘subdivision’ was part of the Veterans’ Land Act at the end of World War II. Still about every 4th house is original. The rest have been built as infills, mostly in the 1960’s. Fortunately much of the tree canopy has been retained. It includes mature maples, oaks, cherries, ash and the occasional walnut tree. In turn, the trees and the large mature canopy attract and support a fantastic array of wildlife that Mike never saw growing up in Don Mills as it had been largely clear cut to make way for housing.

Mike and Pat believe that as the population grows it becomes more important to keep the wooded character of unique communities such as ours. Some of their friends have described their property as “Narnia”, because there are always birds at their feeders and multiple nests on their property. When their daughter was an infant, they used to watch foxes, coyotes and deer come through ‘back trails’ from the park (mostly at night).

The reality is that many of the old bungalows and 1-1/2 story older homes are being replaced as the population grows and newcomers move into the neighborhood. But that doesn’t necessitate the random destruction of what makes this community unique. Mike and Pat feel that, as the population grows, it becomes more important to preserve the unique qualities of communities such as ours.

The Singleton’s believe that home builders, architects and designers should be encouraged to work into the framework of the existing tree canopy to retain the community’s character. But many builders want nothing in their way and seem to believe that everything should come down. More aggressive builders view tree removal fines as a cost of business. At City Hall, the Committee of Adjustment seems intent upon re-writing zoning bylaws by-the-inch. I spoke to an architect from Whitby who designs many of the infill houses in Scarborough Southwest. Aside from the fact that all his designs look remarkably similar, he told me that 87-90 % of his designs require multiple variances from existing community bylaws.

The Singletons are pleased that many people plant new trees especially since the Ash Borer and ice storms devastated much our woodlot but strongly believe that sometimes it takes individuals (legs or not) to stand up and say that re-development plans don’t need to turn “uncommon” into “wasteland”. Mike isn’t afraid to put himself under a tree limb to prevent someone from illegally chopping it down and states – “Sometimes you have to be a pain to politicians and bureaucrats to keep this neighbourhood special.”

Postscript: Two hours after this photo was taken an arborist showed up across the street from Mike and Pat’s house and removed six large canopy trees. No permits were posted.