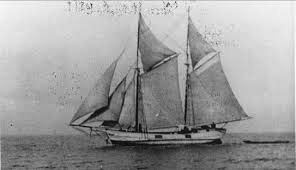 Stonehookers, The Bluffs and Erosion

For close to a hundred years, Stonehookers traveled along the shores of Lake Ontario searching for Dundas shale. They were shallow draft schooners which allowed them to operate close to the shoreline. They towed a small barge behind them. Usually two men would use rakes with curved forks or crow bars to pry and then hoist it onto the barge. When the barge was full, it would usually be sculled to the schooner for unloading. It is estimated they removed 35,000,000 cubic feet of shoreline shale. (Heritage Mississauga)

The shale was a key source of building material taken from the lake. According to the marine historian and journalist, C. H. J. Snider, the taking of stone off the Scarborough Highlands (Bluffs) was so extensive that signs were posted imploring Stonehooking captains not to take stone from that area in order to prevent further erosion. By the middle of the nineteenth century, lakeside farmers were complaining that the wholesale stripping of stone from the lake bottom was destabilizing their land, leading to erosion. (Dorothy Turcotte, Places and People on Bronte Creek).

Contributing erosion factors include; ground water runoff going over the slope or going through the aquifers, lake line wave action, the loss of vegetation (trees and other), the loss of the bottom toe of the bluffs (often during large storms), ground snow runoff, and new development.

By the mid 1980’s several Meadowcliffe Drive residents approached the city with concerns over the extent of the erosion. Since then, there have been well over twenty studies and reports conducted by technical firms and various government agencies – municipal, provincial and federal. The choice for the City was to take a do-nothing approach or a containment approach. Fortunately, they choose the latter as the former would have certainly led to continuing consequential losses.

The groundwater plan led to two diversion projects that can be seen, to an extent, by taking a walk down the Doris McCarthy Trail in the Bellamy Ravine. On the way down you will see two large storm sewers sticking out on the west side of the trail. The first one directs water runoff from Kingston Road. The second diverts ground water and household down spouts from Meadowcliffe Drive. Both discharge the water down the ravine and terminate in Lake Ontario.

The second major initiative was to buttress the bottom of the bluffs to reduce the effect of waves on the shoreline which started in xxxx. At this point it is likely to be completed in xxxx.

In the twenty-three year period my parents lived on Meadowcliffe Drive, over one hundred trees were removed on the street by residents mostly for development-related reasons. This is one of the areas of the Scarborough Bluffs most at risk of erosion and trees would help to absorb ground water.

The bluffs are a wonderful but delicate environmental feature in Toronto that requires our respect. Perhaps we can learn from the irreparable mistakes made in the Stonehooker days.