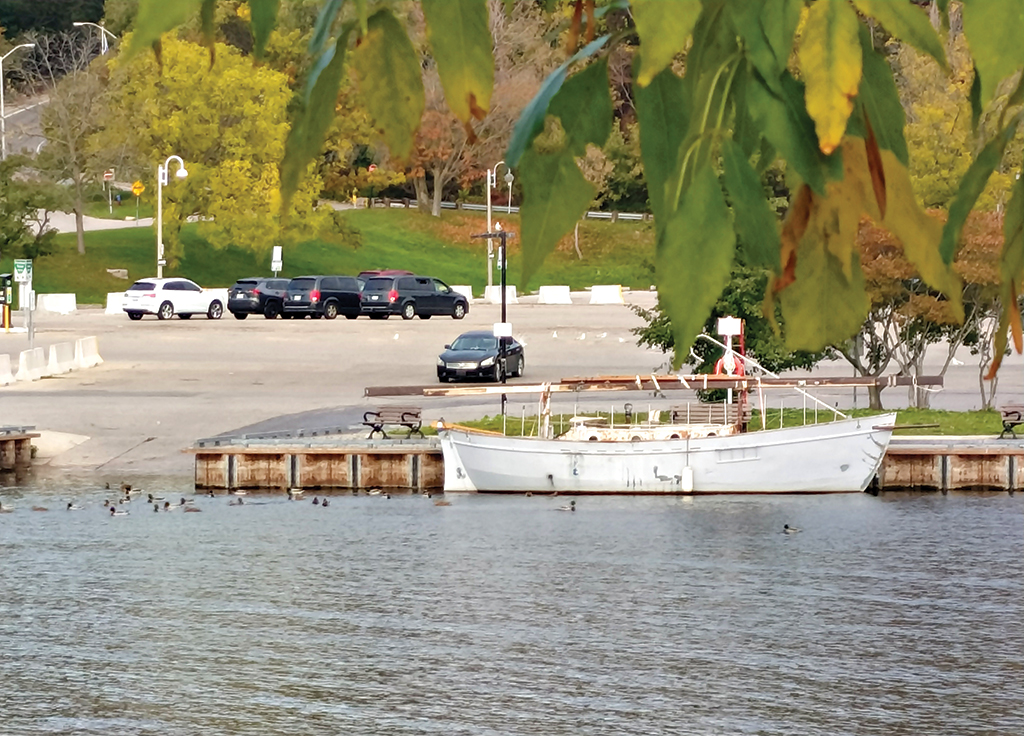 An orphaned boat at the public dock in Bluffers Park.

In Bluffer’s Park and harbours all around the great lakes, there is a lot of activity when summer draws to a close. Sail and power boats at yacht clubs and marinas are hauled out, placed on cradles or trailers, their engines winterized, then covered with tarps or plastic wrap. Bluffer’s Park takes on a decidedly different look in late October after the clubs rent giant cranes for their haul-out weekends, which began this year on Oct 23.

But what about boats that remain in the water after the cranes have departed? Each year, a handful of hardy souls known as “Liveaboards” stay on their vessels in the yacht clubs and marina during the winter. This might seem adventurous and fun to some, but it’s not as easy as it looks. Electricity, water, and of course heat all have to be arranged. Many Liveaboard boats have plastic wrap over all, or parts of their decks to hold in warmth, and a few clear plastic windows cut in the shroud to allow visibility. The number of these intrepid sailors seems to me to dwindle in February and March, perhaps when people have had enough of “winter on the water” and decide to finish the cold season on land.

But Haulouters and Liveaboards are not the only players along the waterfront when the season ends. Every year, orphan vessels turn up at the public launch ramps and the yacht club and marina docks. One or two have even washed up on the beach or been found adrift on open water. These abandonments can be attributed to different factors. Owners become physically or financially unable to maintain their vessels, or life changes happen that cause boats to be discarded. These incidents are probably increased by a marine version of the “Van Life” culture that has surged since the appearance of COVID- 19, and drawn novice sailors into situations beyond their capabilities. These events are always unwelcome. Abandoned boats are much more expensive and complicated to deal with than cars or trucks, and almost always become a liability.

According to Ross Merikallio, General Manager of Bluffers Park Marina, the number of abandoned boats in the Brimley basin has increased over the past few years, and in 2021, it appears that 4 derelicts are already moored at the public docks. Once a derelict has been reported, the first step is to locate its owner. This is often not easy. Aware of the consequences of their actions, people usually remove all vestiges of their ties to a vessel they no longer want. Information about many boats, especially old ones, is out of date or even nonexistent in the Canadian Vessel Registry.
Kevin Lee, an officer with the Toronto Police Marine Unit, told me that when efforts to locate the owner of an abandoned vessel are unsuccessful, the file may be pursued by his service, by Toronto Parks, the Toronto Port Authority, or even the Coast Guard depending on where it was found and other circumstances. End of life vessels in clubs and marinas are the responsibility of those organizations.

The good news is that while their number might be increasing, abandoned vessels remain a very small fraction of boats in the marine community; a group of people who generally treat their yachts properly, whether they are in the water in summer, or on land when the snow flies.

Jim Sanderson is the author of “Life in Balmy Beach”, and “Toronto Island Summers”,available at Cliffside Village Books, 2404 Kingston Road, 647-827-9199